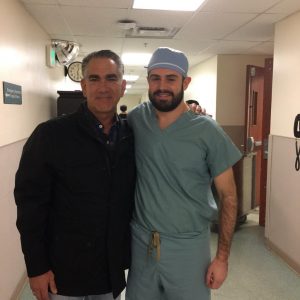 Alexander Sherman grew up in a home where both of his parents were very involved at St. Nicholas Church in Northridge CA. Needless to say, he attended St. Nicholas school through the eighth grade where he also served as an altar boy and a volunteer for the Valley Greek Festival.

The next four years were spent at Notre Dame High School in Sherman Oaks CA, where Alex played water polo; holding the position of team captain his senior year as well being a member of the sports medicine team. It was during this time; he began shadowing a Los Angeles veterinarian to witness animal surgeries so that he that he could get a feel for the operating room.

Alex chose the University of California, Davis for his undergraduate studies. He holds two degrees – Neurology, Physiology, and Behavior (NPB) and Psychology. During this time, he served as the president of his fraternity (TKE) and worked on several research projects in the fields of Neurology and Cellular Biology. Before completing his degrees at U.C. Davis, he spent the summer researching Amyotrophic Lateral Sclerosis (ALS) at the Johns Hopkins School of Medicine in Baltimore MD; an internship that he continues to make himself available for every summer.

Now a fourth-year medical student at the University of New England College of Osteopathic Medicine, Alex is closer to fulfilling his dream of becoming a surgeon. He has presented his published work from John’s Hopkins at multiple U.N.E research seminars, taking first place at NEOMEN 16th Annual Research & Scholarship Forum, for best medical student original research.  In addition, he was involved with Urology research at Hahnemann University Hospital in Philadelphia. He would like to graciously thank HAMDS for the continued support of his medical career.