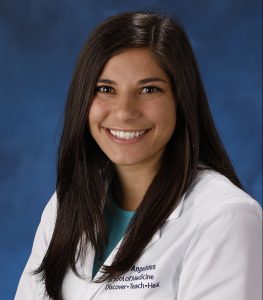 Sophia Angelides was born in Berkeley, California to Stephen and Thalia Angelides. Both of her parents are of Greek descent and her family originates from Amfissa, Ikaria, Corinth, and Kefalonia. She was baptized and grew up in the Ascension Cathedral in Oakland, California. During her childhood and young adulthood she participated in GOYA, Maids of Athena, the Folk Dance Festival, the Greek Festival, and Ascension Summer Camp Ravencliff.

Sophia attended UCLA where she earned a Bachelor of Science in Neuroscience and a Bachelor of Science in Psychobiology. While at UCLA she was an undergraduate research assistant in a neurology laboratory where she conducted research on Temporal Lobe Epilepsy, Alzheimer’s Disease, and Depression. She also served as Vice President of Pi Beta Phi, and participated in many student organizations such as GlobeMed. After college she worked as a medical scribe before continuing her education and earning a Master of Medical Sciences at Boston University.

Sophia is currently a second year medical student at UC Irvine School of Medicine. She serves as a board member of the Student Interest Group in Neurology and volunteers through many organizations. She is extremely grateful to HAMDS for supporting her pursuit of becoming a physician.