The Hellenic American Medical & Dental Society (HAMDS) was established the “George C. and Akrevoe Emmanouilides” Scholarship Fund in honor of Dr. George C. Emmanouilides MD and his wife to provide financial assistance to medical students of Hellenic descent who are from California or attend medical school in California. 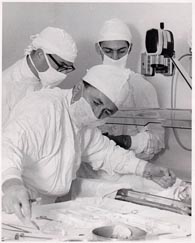 Dr. George C. Emmanouilides, or “Dr. E” as he was affectionately known by countless patients, colleagues and friends, was born to refugees from Pontos in the village of Kyria, Greece, in 1925 or 1926. (Because so many documents were lost, he was never sure of the exact date.) George was the eldest of six brothers and a sister. His son, Chris, has described him as “…a refuge of sorts, a survivor of war and occupation, and of a home burned to the ground, with just books and barely enough food saved as they had been hidden in a cellar.”

After the war, George was able to finish high school, as all of the schools during wartime had been 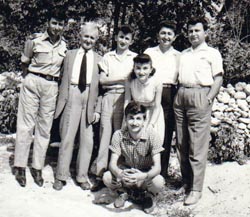 closed. On completion of his studies, he desired to study medicine at the University of Thessaloniki. His mother did not want him to go but to remain, become a merchant and help his five brothers go to the university. His father, however, wanted him to continue his education. George was an excellent student and was one of 300 admitted to study medicine in Thessaloniki, and only one of 10 (five boys and five girls), who completed studies in a timely fashion.

On completion of his studies, George served, as is required, in the army. His experience working with the elderly as a doctor in the army showed him where his interest lay. He then decided that his preference was in pediatrics and he wanted to come to the United States to study further. His father was able to provide a one-way ticket only.

In 1955, George had an opportunity to study in the United States as an intern in Oak Park Hospital near Chicago. He was then able to complete his pediatric residency at Philadelphia Hahnemman Medical College. In the ensuing years, he continued his studies in Washington, D.C., where he was granted with fellowships in pediatric hematology and pathology. He began his career in pediatric cardiology at the Hospital for Sick Children in Toronto, Canada. Through the National Institute of Health traineeship at the UCLA School of Medicine, he earned a Master’s degree in Physiology. And in 1963, he was appointed to the UCLA Faculty at the then newly opened Harbor General Hospital in Torrance, California.

Dr. E’s accomplishments are many. His professional interests focused on fetal, neonatal and cardiovascular physiology and clinical pediatric cardiology. He was the first to introduce the umbilical catheter to diagnose cardiac defects in the newborn infant. Board certified in Pediatrics, Pediatric Cardiology, and Neonatology, he co-edited the 2nd, 3rd and 4th editions of Heart Disease in Infants, Children and Adolescents, the primary textbook of pediatric cardiology, and served as senior editor of the 5th edition. In addition to two books, he was the first author on more than 100 papers in his field. Over the years, he lectured in Iran, Japan, Hungary, Romania, Colombia and throughout the United States. Countless children, families, and physicians have benefited from the clinical work and research of Dr. Emmanouilides.

From 1980-82, he served as Chair of the Cardiology Section of the American Academy of Pediatrics. In 1995, he became a Corresponding Member of the Academy of Athens, a most significant honor for any Greek scholar living abroad. Other honors he received include the Sherman Mellinkoff Award given to the UCLA School of Medicine faculty member “whose teaching best exemplifies dedication to the art of medicine and the physician-patient relationship,” the Founders’ Award of Cardiology Section of the American Pediatrics, and the Distinguished Physician Award from the Hellenic Medical Society of New York. In May 2004, the Research and Education Institute of Harbor-UCLA Medical Center initiated an Annual Award for those physicians who have become legends in their particular specialties. Dr. E was among the first seven scientists included in this group. 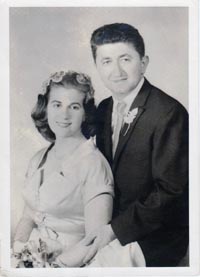 Dr. Emmanouilides met his wife Akrevoe on a bus from New York to Philadelphia while reading a Greek newspaper. He shared his life and love with Akrevoe during their 54-year marriage. Together they raised five children, and son Chris shared these thoughts: “He opened the world to us but he also conveyed balance and temperance which still guide us as we make choices in life today.”

His contributions to the medical field are enormous. George Emmanouilides’ love of his family, his faith and humility were the centers of his life. 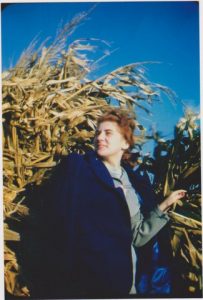 Akrevoe Kondopria was born in Philadelphia, Pennsylvania, on September 11, 1928, to Greek immigrant parents, Nicholas and Maria Kondopria. Her father was from the Ionian island of Lefkas, and her mother from Peramos near Constantinople. Her father was virtually illiterate but was very clever with figures. Through the years working in his small restaurant and with wise investments, he was able to support the family well. Akrevoe had two younger siblings, Kathryn and Theodore. When she started school, she not only didn’t she speak English but had very bright red hair and an unusual name few classmates could pronounce. This did not hinder Akrevoe as she loved learning and excelled in all her studies. She quickly skipped a second grade and graduated from high school at 16.

A counselor at high school urged Akrevoe to apply to the University of Pennsylvania where the Moore School of Electric Engineering needed a secretary. There she met Herman H. Goldstine, the officer between the army and the university where they were building the ENIAC Project, the first electronic computer. The ENIAC has been called the machine that changed the world, and it certainly changed hers. When ENIAC was completed in 1946, Goldstine was recruited by the Institute for Advanced Study in Princeton to guide Professor John von Neumann in building another computer. Goldstine invited Akrevoe to go with him, and she accepted.

Akrevoe met her husband, Dr. George Emmanouilides, on a Greyhound bus. They came to Los Angeles in 1961, where Dr. E was Professor of Pediatric Cardiology at Harbor-UCLA Medical Center throughout his important career.