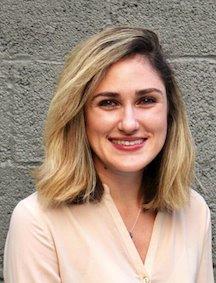 Evangelia Lazaris was born in Los Angeles to two Greek parents. Her family originates from Nafpaktos, Patras, and Athens. She was raised speaking Greek in the home and expanded her knowledge of the culture and language through yearly visits to Greece, as well as by attending St. Nicholas Greek Orthodox School.

Upon receiving her degrees from UC Davis, Evangelia began her studies in the Master’s of Science in Narrative Medicine Program at Columbia University. As she worked toward completing her master’s, she was a visiting researcher at the Global Bioethics Initiative, an NGO at the United Nations. While applying to medical school, Evangelia returned to Los Angeles, working as the Associate Director at the American Hellenic Council, while concurrently conducting Narrative Medicine research at USC Keck School of Medicine.

Evangelia is now in her fourth year at the University of Utah School of Medicine and is currently applying to and interviewing at residency programs in Obstetrics and Gynecology. In addition to her medical studies, she is part of the University of Utah School of Medicine Admissions Committee and continues to conduct research in Narrative Medicine, Obstetrics and Gynecology, and Orthopedic Surgery. She has presented a number of her findings at numerous conferences at throughout the United States and Greece, including Aristotle University in Thessaloniki and the National and Kapodistrian University of Athens. She is currently a member of the Holy Trinity Parish in Salt Lake City, Utah. Proud of her heritage, Evangelia became a Greek citizen in 2015. She would like to thank HAMDS for the continued support of her medical pursuits.