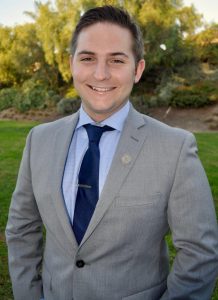 Zachary Dimitri Ellis was born in Irvine, California to David and Georgiann Ellis in May of 1996. He is of Greek descent on his mother’s side and Croatian descent on his father’s. His Greek heritage originates from the Peloponnese, Crete, Samos, and Athens.

Zachary graduated as Valedictorian from San Clemente High School with an International Baccalaureate Diploma and subsequently began his undergraduate studies at Chapman University in Orange, California. There, he earned a Bachelor of Science degree in Biochemistry and Molecular Biology and a minor in Environmental Science in two and a half years. Zachary shares a passion for research and has conducted biochemical, environmental, geospatial, and pancreatic cancer research throughout his studies. His most recent publication was featured in Cardiology in the Young, a pediatric cardiology journal.

Zachary is now in his second year at William Carey University College of Osteopathic Medicine working toward his dream of becoming a Pediatric Cardiothoracic Surgeon and would like to thank HAMDS for supporting him in his lifelong pursuits of becoming a physician.