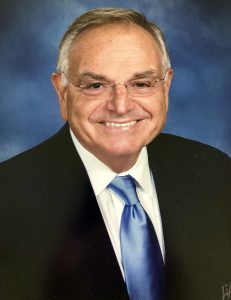 Dr. Christos Thanos is currently a Pediatric dentist in Torrance and Moreno Valley. While he is dedicated to helping all children, his passion lies in helping the underprivileged and those with special needs.

In 1964, an American Field Service Scholarship helped Dr. Thanos come to the United States and complete his senior year of high school in Grand Prairie, Texas. He returned to Greece after graduating, and soon after with a Fulbright Scholarship he returned again to the US and attended Franklin and Marshall College in Lancaster Pennsylvania.

In 1971 he received his DDS from the University of Athens, Greece and then completed his first Pediatric Dentistry residency at the University of London’s Eastman Dental Hospital. Having had his fill of British weather and food, in 1973 Dr. Thanos’ California dreaming brought him to the US again except this time he chose the west coast. He continued his post-graduate studies at UCLA School of Dentistry in Dental Biomaterial Research. He was then awarded an NIH funded fellowship in Craniofacial Genetics along with his second Pediatric residency at Harbor UCLA.

Dr. Thanos always enjoyed academia. While lecturing to UCLA dental students about biomaterials, in 1977 he was lured to the other side of Los Angeles and joined the full-time faculty of the then USC School of Dentistry. In 1979, he assumed the role of chairman of the Advanced Pediatric Dentistry department. He also served as attending staff at Children’s Hospital of LA and Rancho Los Amigos Hospital. In the mid-1980’s he assumed the role of chairman of the Admissions committee at USC’s School of Dentistry and was a member of the dental school’s research committee. He originated the first bonding clinic at USC in the 1980s focusing on porcelain veneers and direct composites.

During this academic period, he published peer-reviewed articles in many professional journals, on dental materials, orthodontics, and adhesive dentistry.  He lectured in the United States, in Central America and organized an international symposium in Greece.

As an international student himself, Dr. Thanos was always available and committed to help guide and mentor students and dentists from Greece, along with Greek American students, to advance their careers and education.